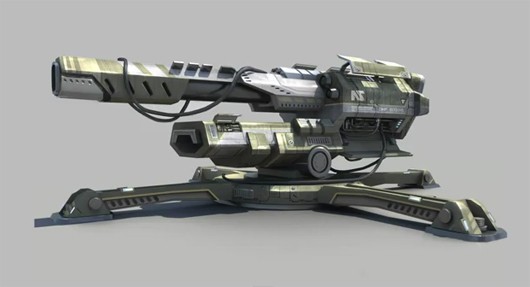 Made out of a Duranium composite, the platform is lightweight and can take a beating before it becomes inoperable. That being said, the Caesar should never be left undefended by any accounts, it should be kept at a Forward Operating Base or a dug in Firebase. If neither of these are available within the Operating Area, its best to defend them with a squad of Coyote’s or Grizzly’s.

The C3-ASAR fires highly charged, shaped plasma projectiles from a eject able 5 shot cartridge before it must be replaced. Because of the shaped nature of the plasma charge, the Caesar has an operational range of up to 80 kilometers before the plasma charge dissipation makes the shot ineffective. Targeting is achieved via a grid system relayed from the forward observer calling in the fire mission, for more pinpoint accuracy, sensor readings from orbiting starships, fighters or Recon drones can be used in conjunction with the Digital Fire Management System.

To steady the Caesar when it is in firing position the barrel extends to its full length and has a traversable firing arc of 180 degrees, to stabilize and counteract recoil the platform has four stabilizing jacks at compass points. These jacks retract upwards when the platform is in travel mode, bring its width and length down considerably, additionally when in travel position, the barrel retracts into itself, cutting its length to almost half its firing length. Wheels then extend from within the base of the platform allowing for it to be moved.

Note: Fire rate is dependent on the firing crew and needs of support fire. The better the crew, the faster the reload time.

There is only one known Caesar variant, known as the C5-BWS. It fires traditional ballistic shells rather than energy shots. It is an experimental Artillery platform that is not in widespread use and would be used in environments where energy cannons would not be usable.